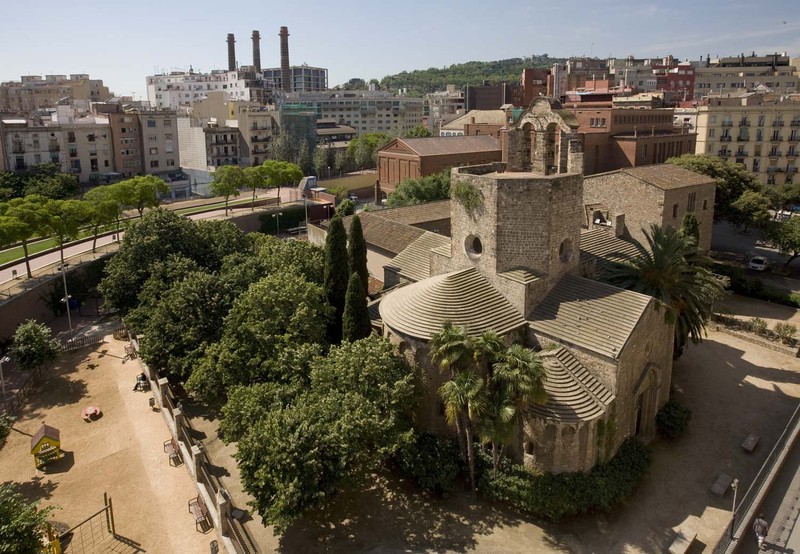 There are different theories, depending on the author we read, about the establishment of the monastery. There exist documents that prove that Sant Pau del Camp was functioning as a monastery since 991. It is believed that the monastery was destroyed by Al Mansur’s troops. After that, it was rebuilt and returned to its normal activities in the XI century.

The monastery was again destroyed by Almoravides in 1114, so there was a second founding in 1117 and that new church is the one we see today.

In 1808, during French occupation of the city, the monks were evacuated from the church to use it as a hospital by the French army. From 1811 until 1813 it was occupied by the Italian army (allied of the French) and used as the local headquarter. In 1814, the monastery became a school-novitiate and the conservation of the building was almost lacking. Although the church was returned to the religious order in 1814, the rest of the monastery continued occupied by the French until 1824.

During the anticlerical riots in 1835, the monastery was burnt and demolished like most of the structures in Barcelona.

From 1842 until 1879, the Army whitewashed the cloister with slaked lime nearly every year for sanitary reasons. In 1899, a restoration plan was carried out by the architect Villar I Carmona, he sealed the main damages, cleaned the walls and removed all the lime plaster that covered the stones. In 1904, this phase was finished with the construction of the actual chapel.

In 1909, during the Tragic Week, the church suffered a small fire with no serious structural consequences but the parish house was destroyed. In 1930 the school of Sant Pau was created close to the church.

In 1936, the provoked fire on July 20th caused huge damage. The altars were destroyed and ornaments and artistic pieces disappeared or were destroyed. Some stone areas were damaged, pavements were partial or totally destroyed, as well as every wooden feature.

In 1939, Manuel Rovira begun the restoration works, but as it was a national monument since XIX century, the Spanish government and the city hall took charge of it. These restoration works were carried out during the 40’s and 50’s.

The last important catastrophe that affected the building was a flooding in 1981. Because of a heavy storm, the water reached 1.5 m above the ground level of the cloister. Finally, in 2007 the cloister was totally repaired.

It consist of three main parts: the church, the chapel and the cloister. The plan of the church has the form of a typical Greek cross, characterized by: a square nave with a length of 8.5m and a width of 8m; two rectangular arms of length 4.8 m and 7.3m respectively; a square central part of 8m each side; three semicircular apses with a diameter of 4.5m for the lateral ones and 7.1m for the main one.

A large dome supported on four arches covers the central part. Barrel vaults characterize all the galleries of the church and semi-domes cover the three apses. The church has three-leaf stone-masonry with a total thickness of approximately 1m.

In the right gallery of the church is the chapel: it has an area of 5.3x5.9m2 and it is covered by a Neo-Gothic cross vault. The cloister has a square space of dimensions 14.4x13.2m2. The central part of this space is an “impluvium” that collects rainwater. A gallery of width 2.7m runs all around this space.

Overall, Sant Pau del Camp is in very good condition, considering its age, the turbulent past that it has endured and the damaging previous restorative attempts. The building possesses very few structural faults of concern. The exterior of the building has endured the centuries well, suffering from minor decays such as weathering, exfoliation, minor cracking with vegetation growth in these cracks, patina growth and the recent addition of Portland cement mortar. While ideally these damages should be addressed, they are not attacking the structural integrity of the building yet and are of minor to moderate importance.

The interior of the church is also in good condition and offers a welcoming and attractive invitation to visitors. It also possesses decay such as stone exfoliation, mortar loss, cracking of varying degrees of severity, patina and mound growth, fire damage and staining and minor displacements in masonry. These too should be addressed but all can be classified as nonstructural damage which does not warrant large scale intervention.