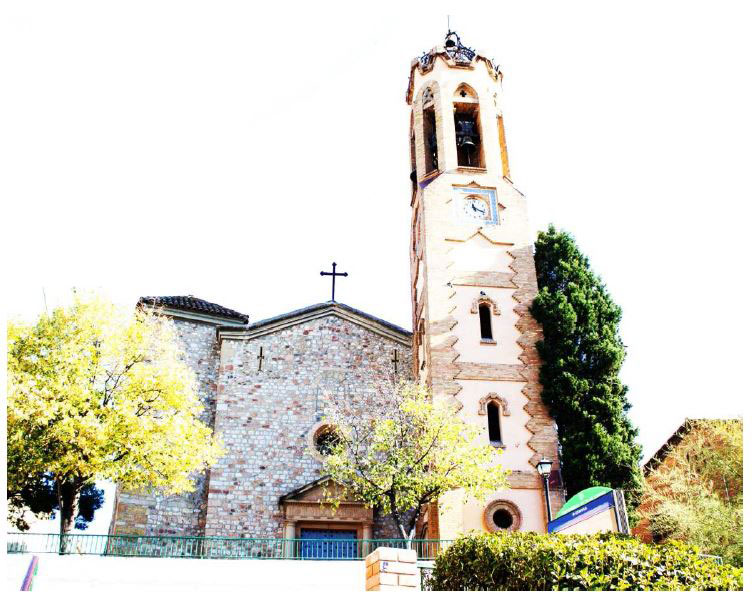 The origin of this construction is Romanic (X c.) and it has experienced numerous transformation in the following centuries. It figures in documents since 992 and it figures as a parish since 1066.

In 1803, the church was remodeled by extending the left side and building the bell tower. It was also built a new roof two meters higher than the previous one.

In 1831, due to a huge storm, the bell tower was destroyed and it was replaced by a pointed vault. In 1862 the right side was extended.

In 1883, the right side was again extended to build the Chapel of the Blessed Sacrament.

In 1892, the bell tower was in very bad conditions, so they decided to knock it down and build a new one. It was the architect Josep Torres Agullol who was in charge of that.

In 1978, the exterior walls were remodeled leaving exposed the stone walls. Finally, in 2004, the bell tower was again remodeled with the goal of reinforcing it.

The original Romanic structure has a cross Latin shape, a central nave with a barrel vault and a semicircular apse. It had also a bell gable of which a part is conserved nowadays.

The original construction has three naves: the central one and two laterals. The central nave is covered by a barrel vault. The lateral naves are covered by spherical vaults.

The walls are quite thick, between 40 and 70cm. The majority of them are form the Medieval age and made of irregular stones. The walls of the bell tower are brick walls. The Chapel of the Blessed Sacrament has the original buttress and it is covered with a barrel vault.

The cracks in the bell tower are due to an error in the design because the structure is opening itself. The high weight and the vibration of the bells are boosting these cracks.

The cracks in the Chapel of the Blessed Sacrament could be consequence of the construction of the annex building. The crack of the lintel in the main entrance could be due to the lack of traction resistance of the stone.

The crack in the spherical vault in the lateral nave appeared after the construction of an access ramp in the other side of the wall. So maybe, the movements in the terrain could modify the basements of the nave and so, the appearance of the cracks.