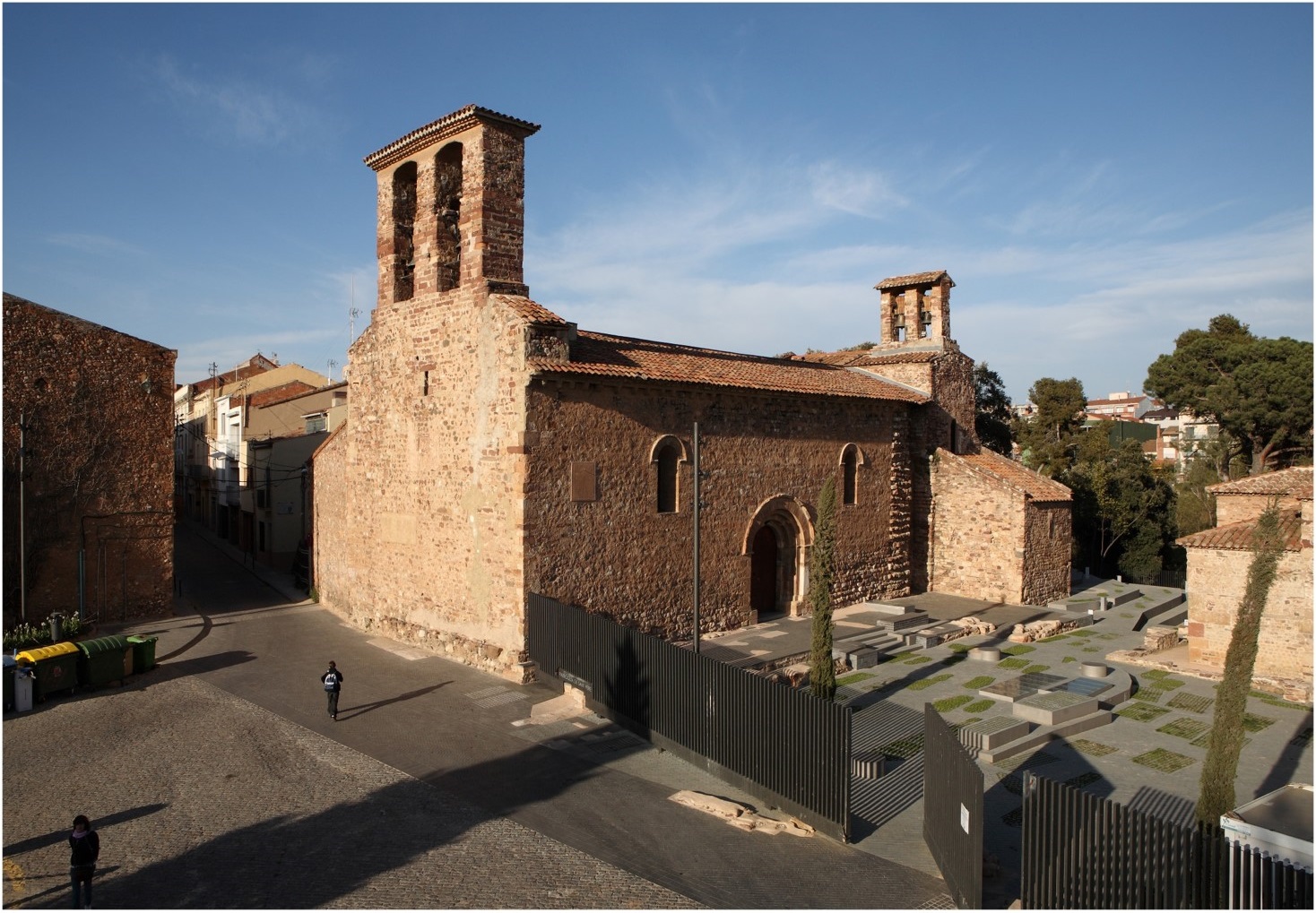 Paleo-Christian and Visigoth period (4th – 7th c.): the place was first occupied by Iberian villages and then colonized by the Romans. It first became an episcopal center, and later a bishopric in the 5th c. In this period a massive basilica was built where the church of Santa Maria is located now.

Pre-Romanesque era (8th – 10th c.): the totality of the complex was subjected to an important restyling leading to the separation of the three churches standing isolated as they are nowadays.

Romanesque period (11th – 13th c.): one of the most important architectural features derives from this period is the masonry barrel vault that covers the main nave. It was built following the layout of the previous nave from the Paleo-Christian period and using some of its remains for the foundations.

First intervention (17th c.): in 1661 the lateral chapel of Sant Valenti was built. A general restoration of the external walls was also done and the construction of the two tower bells. A new lantern was built on top of the apse in order to introduce light to the altar, this intervention is thought to have led to the construction of two buttresses reinforcing the apse’s walls and so, increasing the load on the roof.

The restoration area (1895 – 1951): the lateral chapel of Santissim Sagrament was built in 1880. In 1885, one of the most significant restorations was carried out: the lantern and the bell towers built in the 17th c. were dismantled. The remaining hole in the dome over the apse was closed and the buttresses on the back resized. The vicariate building was also demolished.

In 1905, the whole complex was redesigned by the architect Josep Puig i Cadafalch. The works had to stop because of national conflicts striking the country, but the church managed to endure the Spanish Civil War without suffering any damage thanks to popular support.

Last intervention (1975 – 2014): the first restoration after the Civil War began in 1975. The buttresses from the 17th c. were removed because they were no longer necessary. Reinforced concrete retrofitting of the foundation below the apse was done to discard any future settlement due to change of lateral soil configuration.

In 2001, a set of tie rods were placed in the north eastern wall in order to open a new door. Also, the rooftops of the Santissim Sagrament and Sant Valentì were restored.

The latest restoration was done in 2013-14. It consisted in the consolidation of the main nave of the church with six tie rods and in the repair of most visible structural damages. The walls were cleaned and the interior decorations were also restored. A new entrance was opened in the northern facade.

The Romanesque main nave is covered by a slightly pointed masonry barrel vault which covers a span of almost 8 m. A second masonry barrel vault, higher and taller, covers the transept and connects the main nave to the apse and the lateral chapels. A very characteristic overlapping of three arches can be observed connecting these two vaults.

The 6th c. trilobate apse is covered by a brick on-edge dome and the lateral chapels of Santissim Sagrament (19th c.) and San Valentí (17th c.) are covered by brick cross vaults. The lateral Pre-Romanesque chapels are half barrel on-edge brick vaults built on top of stone masonry walls.

These added units of different periods are independent elements inserted with a visible lack of interlocking. In previous restoration projects, the inner joints existing between units had been infilled with Portland cement, giving to the connections a rigidity the building had never had before.

Archaeological research has revealed that parts of the church are standing on top of remains of the ancient Roman basilica of Egara, which are serving as foundations. The soil where the church is standing is mostly clay. The archaeological excavations carried out in 2001 removed 1m of soil and revealed the foundations of the southern facade, altering both the ground level surrounding the foundations and the natural course of the running water.

Two different kinds of rooftops cover the different vaults: the main nave has a sand and rubble infill covered with roof tiles anchored to a wooden batten. And the northern lateral chapels have no infill and are covered by tiles on top of a wooden structure supported on both steel I-beams and wooden beams.

Material deterioration in stones has been found in isolated areas and caused by poor stone quality, therefore it is not considered as a relevant damage to structural elements. Bio-films are caused by the presence of humidity in the northern facade due to the lack of sunlight. Vegetation presence is a consequence of the lack of maintenance. Most non-structural damages have been found to be directly related to the presence of water in different forms.

The deformation of the pointed barrel vault of the main nave could have been caused by an outward rotation of the external southern wall. The cracks in Santissim Sagrament chapel the cross-vaults and arches could be a result of settlement of the northern exterior wall, eccentric accumulation of waste on extrados or contacts between beam and transverse arches. The cracks in the transept may have been caused by a lack of compatibility or an over-loading from previous additions.