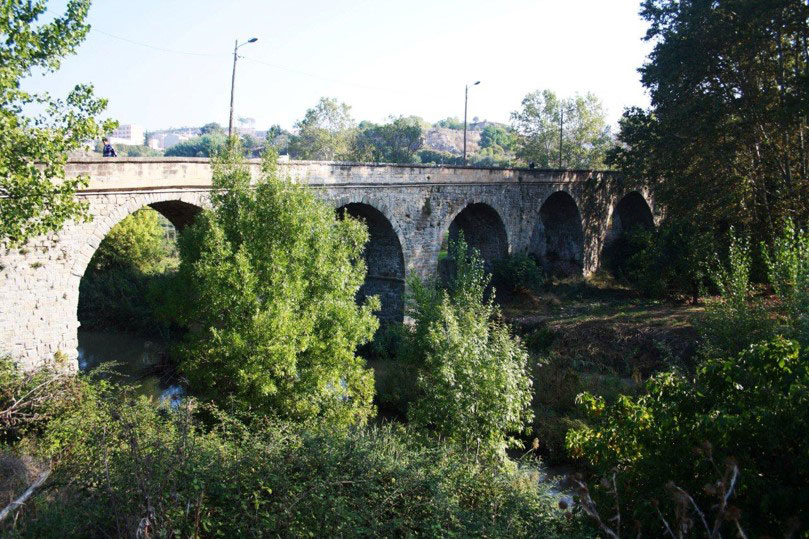 Originally “Pont Nou” bridge was built to give access from Manresa to Lleida. Its construction was first commissioned by the King James II in 18th march 1322 under the direction of the architect Berenguer de Montagut, in order to improve the communication between the two sides of the river. The current name of the city where it is located was given due to the construction of this bridge which substituted the old one.

Previously, there was traffic loading on the structure. However, now the bridge is only open for pedestrian and cyclists. During 1939 there was a blast which partially mutilated three of the arches which were reconstructed the year after. Furthermore, two major floods occurred causing the deterioration of several parts of the structure.

The main events for the structure can be listed as follows:

Built over the River Cardener, the bridge features a Gothic style architecture. It is an eight arched stone bridge (though originally it had nine arches). The bridge is still used by pedestrians and cyclists, however, it is closed to traffic due to its poor condition. It is composed of eight arches with different span lengths; seven piers and two earth fill supports at each end.

The two materials of the bridge are: sandstone for the masonry and lime mortar for the joints. The dimensions of the bridge are a total length of 130m, 5m width and 11.5m of maximum height of the pillars. The bridge is composed of eight different arches of a maximum span of 21.2m and minimum span of 7m. The pillars have a triangular cut-water.

Vertical cracks appeared at the bottom of each of the piers, a key indication that settlement has occurred as a consequence of erosion which has caused a loss of material at the foundation at each of the piers. This is a common defect that occurs when a structure is subject to running water.

There were also cracks in several arches which have been caused by thermal expansion, freezing and thawing and as a consequence of past interventions. Finally, those cracks may also have been formed due to differences in the stresses and deformation at different parts of the arch, due to the difference on the stiffness of those parts.

The bridge has existed for almost seven centuries, consequently a large proportion of the structural elements have been subjected to different cycles of weather conditions causing deterioration of the materials.

Additional features which have been added to the structure to modernize the bridge, such as lamp posts have caused corrosion to a small section of the elements.