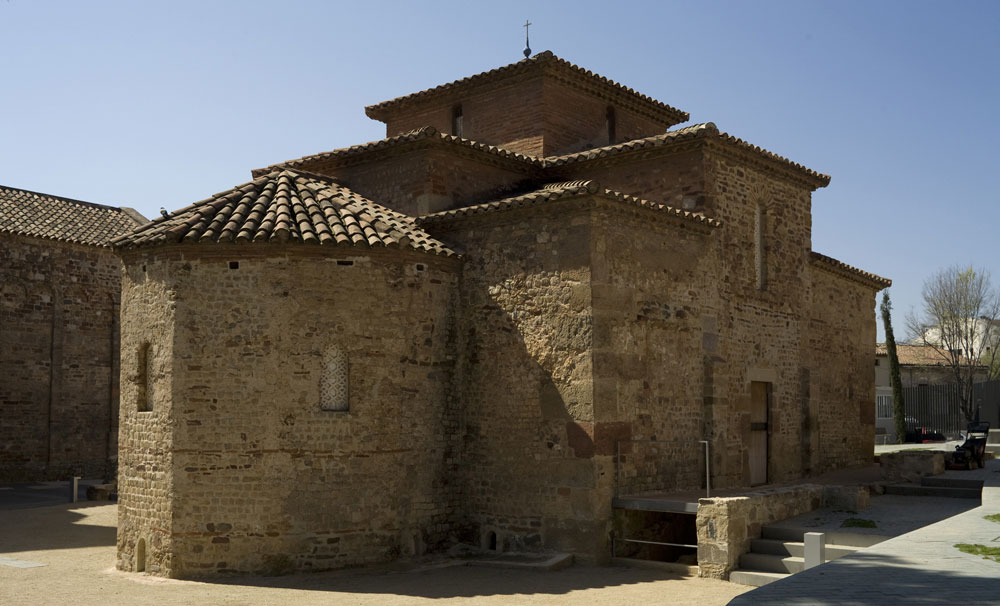 The complex of Seu d’Egara englobe the churches of Sant Pere, Santa Maria and Sant Miquel. It is considered as Heritage of Cultural Interest in Spain.

Iberian and Roman period (V B.C – III A.C): the first settlement is dated in the Neolithic. But in the IV century B.C there were an Iberian settlement. From the II c. B.C this place was Romanized. There are still some rests from the Roman period.

Centuries V – VIII: during this period some Cristian constructions were built and one of these constructions was the church of Sant Miquel. This church is the only building which conserves the original plan and facade from the VI century and it was a church where to entomb the deceased.

Medieval period (IX c. – XIII c.): in 988 the church suffered the only structural modification which was the demolition of the exterior gallery. During this period the churches of Sant Pere and Santa Maria suffered some important changes, while the church of Sant Miquel reminded almost the same.

Gothic period (IX c. – XV c.): during this period there were not any important structural changes, most of the changes where related to the decoration.

Modern period (XVI c. – XVIII c.): in the XVII century, the facade of the temple was rebuilt with more uniform and square stones than the original ones. Also, the door was built in a higher level than the original one. In the same century, most of the walls and the vaults where rebuilt when the building suffered an important demolish.

Present: between 1917 and 1921 the architect Josep Puig i Cadafalch rehabilitated the complex. In the church of Sant Miquel he identified a baptistery of the Visigothic period and during the restoration of the building, he decided to build a pool where to baptize the new Christians. But then, in 2005, a new archeological study determined that it was not a baptistery but a mausoleum.

In 1980 J. Ambròs did some reparations of the roof. In 2002, due to structural problems, some rods to stabilize the building.

Finally, in 2005, it was done the last restoration project by Alfred Pastor. The exhumation of the hidden mausoleum was done. The lattices were cleaned and the cement that Puig i Caldafalch used between the ashlars was removed.

It is a Romanic construction of one floor and a square plan (11x11m2 aprox.). At the end of the presbytery, in a semi-basement floor, there is the crypt bellow the altar.

The main access is located in the South facade and it has two other entrance in the North and West facades. The roof is covered with tiles, but originally it was covered by stone slabs.

The plan shape is a Greek cross. The apse has the shape of a horseshoe. The eight columns were reused or came from other buildings. They are divided in three groups: the oldest group (2, 3, 7 and 8) made with White marble possibly come from the Roman period; the second group (4 and 5) are also of marble from the VII century; and the last group (1 and 6) are approximately from the centuries VII and IX.

In general, the Sant Miquel church was in a good state of conservation: the facades, interior, and surrounding site were well maintained.