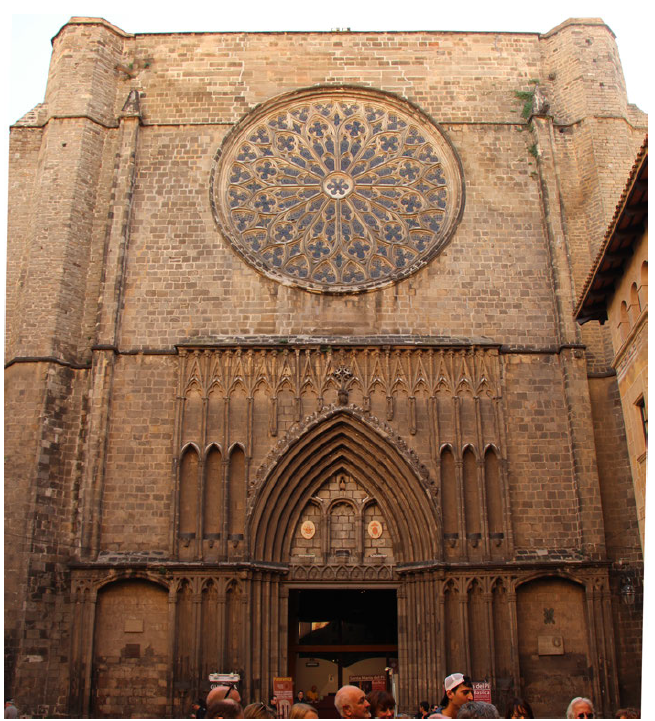 The building we can see today was constructed on the remains of a previous church. The first reliable reference from the first church dates back to the year 987, but historical documents are lacking to prove it. The construction process of the church we can see today begun around 1320. The last stone was placed in 1391 but the main facade and the bell tower were completed some years later.

In 1428 there was an earthquake in Catalonia and the lateral facades of the church were damaged.

In 1714, during the Succession War, an explosion caused severe damage to the building, in fact, some vaults, windows, walls, pavement and the rose window were destroyed.

Between 1863 and 1880 the church suffered a huge process of restoration where the director of the works, Francesc de Paula Villar, decided to replace all the previous internal elements. During these works, an auxiliary structure to support the keystone of the central vault was erected and some timber members were replaced by steel ones.

The 20th of June 1936, during the Spanish Civil War, an anticlerical group entered in the church and fired it. Due to this event, most of the remaining internal wooden decorations were turned to ash and the rose window was destroyed.

Around 1950, the architect Jeroni Martorell started another period of restoration. The rose window was rebuilt for the second time following the original model, some stones were substituted and the cracks were repointed.

Finally, in 2009, the Gereralitat de Catalunya did some works of restoration to remove the steal placed in the 50’s because the humidity was causing the expansion of the steal and so, they were creating important fissures. It is also planned to waterproof the roof in the future years.

It’s a religious building from the latest Gothic.

The structure of the nave is a rectangular body of 54 m long, 16.5 m wide and 28.5 m high. It has 7-axis buttresses of 1.5 m thick at the base, separated 4.5 m approximately each. It was originally built with stone from Montjuïc and with lime mortar joints. This rectangle ends in a polygonal apse formed by six radially disposed buttresses with the same thickness as the above. The ship deck is made up of cross vaults in typical Gothic style.

Attached to the church there is an octagonal belfry of 54 m height. It is structurally detached from the nave, which operates independently, supported on stone walls that at the base have a thickness of 3.5 m. The space between the church and the belfry was tapped to expand the actual area of the building.

Damages found in the structure of the church do not represent an immediate risk to the structural safety. The cracks close to the rose window were repaired and, by visual inspection, it doesn’t seem that they have reopened. In the added building in 1764 many cracks have appeared, this new construction has part of the structured based on the ground and the other one is based on the original building. Some of these cracks have placed a plaster witness that has not been opened from the 70’s, so it may indicate that the cracks in this place are not active.

The cracks problems found mostly in the facade and the apse seem to be stabilized, however, it requires a detail monitoring to know if it is possible to continue growing.

The material losses are normally due to weathering or compressible stresses. However, some of them could be due to the rehabilitation itself.

To provide electricity and other services to the church, some damages have been done.

[4]         P. Roca Fabregat, “Studies on the structure of Gothic Cathedrals,” in Historical Constructions. Possibilities of numerical and experimental techniques, University of Minho, 2001, pp. 71–90.