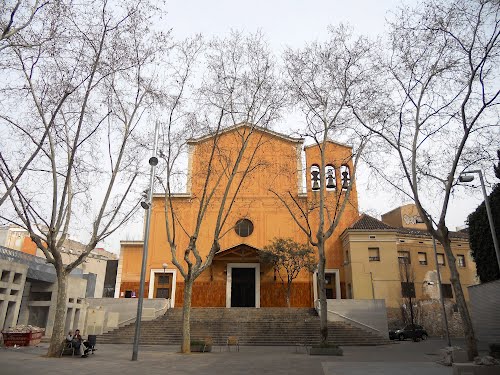 Some sources consider that this church is even older than Santa Maria Pi church. Some texts prove that in the year 986 the church already existed.

In 1689, after the “War of Nine Years”, the church was repaired because it had been damaged during the French attacks.

In July the 18th 1936, the church was completed burned by the republicans during the Spanish Civil War and so, only the foundations were stood after the fire.

The church we see today was built around 1940 and 1946 as a project of reconstruction of the older building. The project was ordered to Mr. Romaní. He presented five different projects to the ministry but they didn’t approve them so, he quit. Finally, the construction was done by the architect Duraán i Reynals. He tried to reuse as much as it was possible the original foundations. In February the 11th 1940, the works started.

The building has a main and central nave and two lateral naves separated by a double row of arches which finish before the altar and they end into a cruise where the lateral altars are.

The nave is 13m width. The lateral naves, of less width, give access to two chapels at both sides of the apse and to a group of smaller altars.

The new foundations that where built are made of Montjuïc stone masonry, concreted with cement of 3550kg. They are properly linked to the old foundations. The exterior walls are of ordinary masonry and 45cm width.

The origin of some cracks may be due to the construction of additional buildings. Cracks located in the arcs may be related to the use of different materials. We don’t have to discard the hypothesis of differential settlements in the foundations that could have caused cracking.
Moistures may be due to poor waterproofing of the building that is allowing water infiltration or just poor ventilation of the church itself.