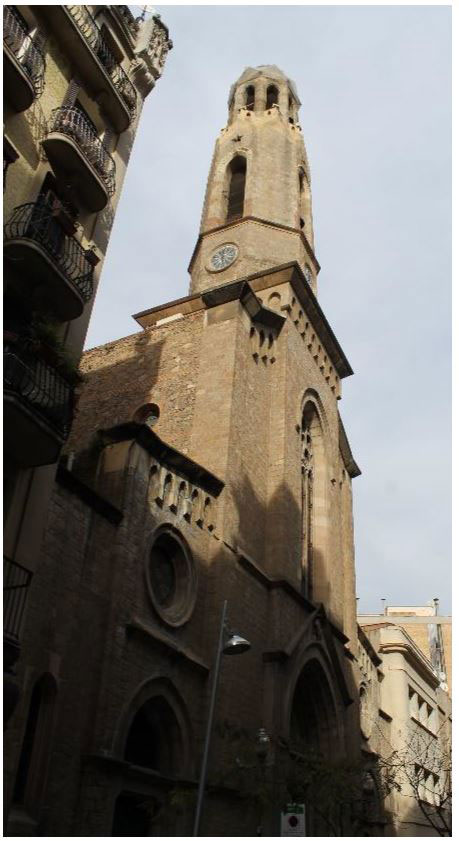 The church Santa Madrona, situated in the neighborhood Poble Sec, Barcelona, was inaugurated on 24 May in 1888. It was designed by the architect Adriano Casademunt and constructed by master builder D. Francisco Riera. Due to the rapid development of that part of Eixample, the church was open before the bell tower was completed.

The main events that affected this construction were: the fire in July 1909 during the tragic week, which caused some damage to the main facade and the interior of the church. In 1923, the bell tower was constructed much taller than originally designed. Although, during the Spanish Civil War in 1936, the highest part of the bell tower was taken off to avoid being an easy target to bombers.

During this period, the church was again lit on fire. The benches and other furniture in the church were burnt and this caused formation of huge cracks in vaults, arches and the walls. During the occupation, the church was used as garage. An anti-raid bunker was constructed under the central nave. The entrance of this bunker was located in front of the main facade, while the exit was at the door of the apse. The construction of the bunker seriously damaged the foundations of the church and caused infiltration of water in the buildings located in the surrounding area. Consequently, in 1939-1940, an intervention to strengthen the foundations and to fill the bunker was performed.

In 1988 a new parish building was constructed and finally in 2014 the church was provided with new furniture and some superficial interventions were carried out.

The church has an eclectic style as it is a blend of Romanesque-Gothic style with Byzantine details. The floor-plan has a cross shape and the apse is oriented towards the West. The main facade presents pointed-arch doors and a 50 m tower. The church consists of a central nave of 11.6 m width, with a height of 18.5 m to the arches and 20 m in proximity to the dome. On each side of the central nave there are lateral naves, each one has four chapels with pointed arches. In the central nave there are pointed-arch windows which are closed by stained glass. The transept is crowned by an oval dome that reaches 32 m of height. The presbytery is risen several steps above the level of the temple. Six free columns and two embedded ones surround the presbytery, leading to seven symbolic compartments. All the columns of the temple are topped by stone capitals. The sacristy is located to the right of the apse, and the rectory is in a building annex to the church on the right side of the main facade of temple.

Most of the repointed cracks are not reopened and the cracks other than the repointed ones are generally not of large width. The church could be said not to be in imminent danger where an urgent investigation is needed.