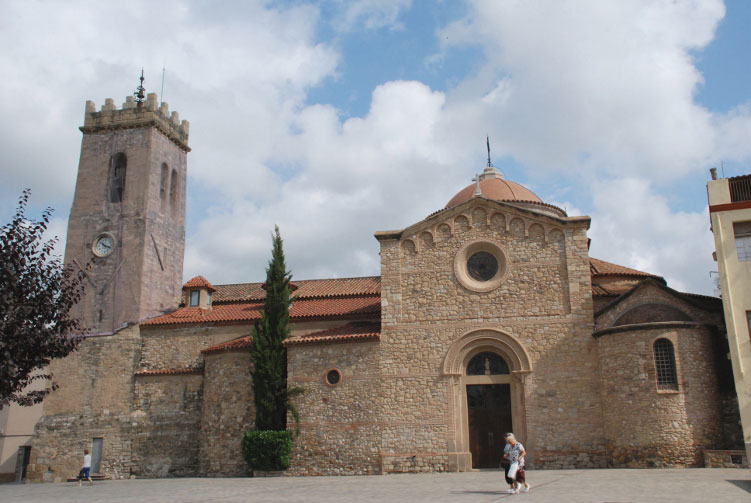 The earliest documented reference of the church of Sant Pere de Rubí is from 986. But it is known that the temple existed even before, it has existed probably since the late 9th century. This fact can be deduced from its architecture and also from the fact that it appears more than once named in the documents of the monastery of Sant Cugat and the churches of San Pere de Terrassa. Although the church of Sant Pere was first referred to in year 986, some elements are prior to this date. There is an indication of the existence of a little Paleochristian or Visigoth temple.

In the 11th c. the temple was rebuilt in style Romanesque-Lombard, as can be seen on the west facade. Also in the 13th c. two changes were done: the front door was remade into more magnificent central door with laterals columns and the primitive Romanesque roof was substituted with a new round almond shaped Gothic roof.

Big earthquake happens in the 15th century. The construction of the bell tower, the lateral chapels and adjacent buildings of community houses.

In the 19th century the demographic of Rubi expanded significantly and it leads to its expansion. The work began on December 5th, 1882 behind the presbytery where the old parish cemetery had been. The expansion increased the capacity of Sant Pere considerably and the new church was inaugurated February 20th, 1884.

In 1927 repairs works were carried out including: new benches, floor tiles, and stain glass; repair of roof tiles; and, other details. On July 20, 1936, during the Spanish civil war, it was set in fire and many objects of religious worship were lost. During the 90's, the battlements of the bell tower were restored.

The main entrance is at the west side, entering into the main nave with a pointed barrel vault roof of approximately 8m span and 20m length. The vault is resting on a series of square masonry piers separating the two lateral naves (north and south). The lateral naves consist of a series of aisles with domes or vaults. The eastern end of the church is semi-circular with a high chancel surrounded by an ambulatory. The bell tower was inserted later on the 16th century. The main construction material of the church is a local type of sandstone.

The church is accessible only from the west and south part as the other sides are in contact with community buildings since the 15th century.

Past movements of the structure from soil settlements and earthquake, past alternations during its service life and poor construction details, resulted in cracking of the south, north and west external walls of the building.